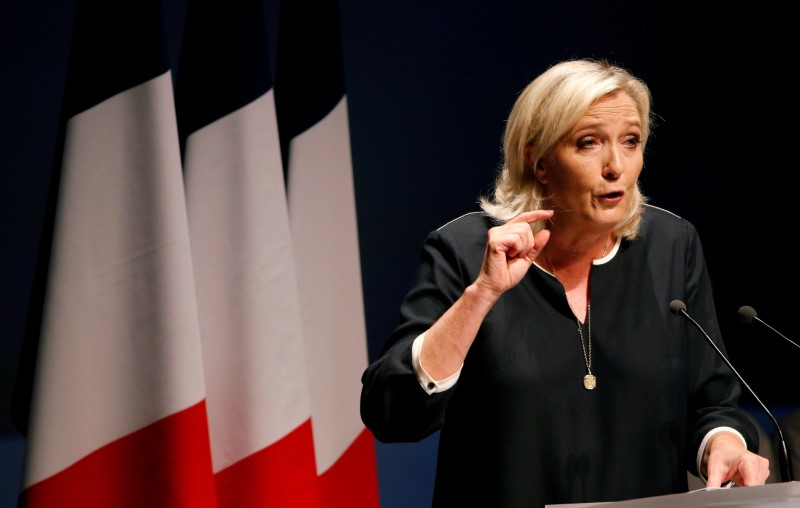 By Yoruk Bahceli and Stefano Rebaudo

(Reuters) – Bond investors who remember wild market swings before France’s 2017 presidential vote will be keeping a close eye on how far-right leader Marine Le Pen’s party performs in local elections there this month.

Polling takes place on June 20 and 27, and surveys suggest Le Pen’s Rassemblement National party could win Provence-Alpes-Cote d’Azur in the south, which would give the far right control of a region for the first time and boost her standing before a predicted presidential re-run in 2022.

In 2017, analysts cited Le Pen’s campaign to take France out of the euro and European Union as a significant factor in a rise in government borrowing costs across much of the bloc.

Since losing that run-off to Emmanuel Macron, she has dialled back her euroscepticism, saying France’s fortunes can be improved within the euro zone.

Investors, however, say her continuing opposition to closer European integration remains a dampener on demand, especially at a time when the EU’s jointly backed recovery fund – central to its response to the coronavirus pandemic – has bolstered confidence in regional cooperation.

“Clients let us know that they are concerned about France and that they are less interested in OATs at the moment,” said Jolien van den Ende, rates strategist at ABN AMRO (AS:), referring to French government bonds and citing political risk ahead of the local elections as a factor.

A strong local election showing for her party could also hit market sentiment just as calls grow for the EU to reform government borrowing limits that are set to be restored in 2023 after being suspended during the pandemic.

Polls forecast a repeat of the 2017 presidential run-off next year.

They project Macron would win but by a substantially narrower margin, with one showing him securing 53% of the vote and Le Pen 47%.

Should Le Pen’s party, which topped the standings in France’s 2019 European election, gain in this month’s local ballot, investor unease about the presidential vote is likely to increase, said Sebastian Paris Horvitz, head of research at La Banque Postale Asset Management in Paris.

“The market will not take it very well,” he said.

France’s benchmark sovereign borrowing costs are up 53 basis points so far this year, while the extra yield investors want to lend money to France over Germany has risen 11 bps.

Uncertainty ahead of the 2022 election could push that gap 25-35 basis points wider across the yield curve, Goldman Sachs (NYSE:) forecasts. Italian and Spanish spreads may also widen 20-30 basis points against Germany, similar to what happened in 2017, the bank said.

Given the softening of Le Pen’s stance towards Europe, market volatility is unlikely…