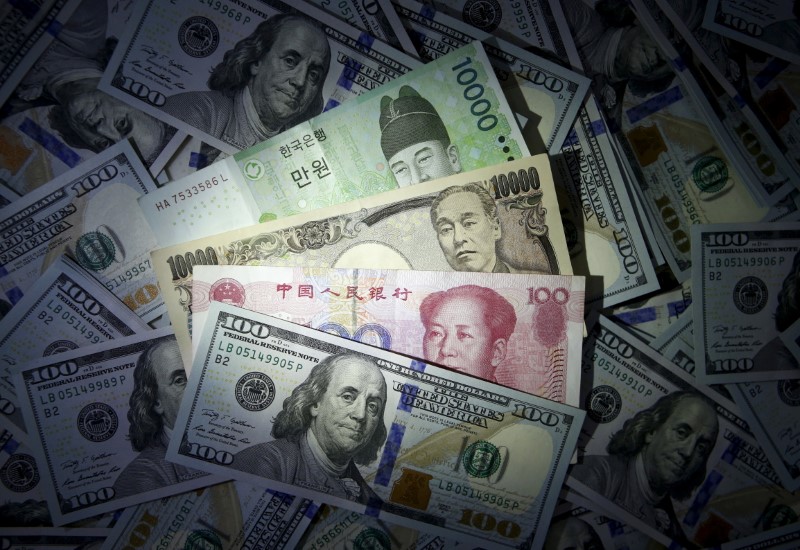 BENGALURU (Reuters) – Long bets on most of Asia’s emerging currencies were trimmed, a Reuters poll showed on Thursday, as investors weigh the prospect of tighter monetary settings as the U.S. recovery outperforms, while the COVID-19 situation locally is brought under control.

The 13 responses came in before the Federal Reserve’s policy meeting late on Wednesday where it stunned by signalling it might raise interest rates as early as 2023, a faster pace than initially assumed.

Emerging markets in the past have not fared well with the prospect of U.S. interest rate hikes, and with the Fed opening the door to an accelerated timetable to wean off pandemic-driven monetary stimulus, it could suck funds out of riskier assets and force Asia’s central banks to tighten quicker.

For now, investors remain largely bullish on emerging currencies in Asia, with long bets on the Taiwan dollar and Indonesian rupiah slightly raised from two weeks ago.

The central banks of both countries meet later on Thursday and are expected to leave policy rates unchanged at record lows, but may offer more commentary on their own timetable and economic outlook in light of the Fed’s hawkish shift.

Taiwan’s dollar has appreciated sharply since late March as the economy booms on the work-from-home trend fuelling global demand for tech.

Bank Indonesia’s governor has promised to keep rates low and liquidity in abundance until there is inflationary pressure, but also warned that local bond markets – susceptible to foreign flows – may be impacted by U.S. policy shifts.

Long bets on the rupiah were at their highest since February.

The Fed’s hawkish messaging sent the U.S. dollar to its highest level in around two months and resulted in declines across Asia’s currency space on Thursday, including a more than 0.5% drop by the rupiah.

Emerging markets “will face material headwinds over the next several months” and “will likely sell off in absolute terms and will underperform their DM (developed market) peers,” said Arthur Budaghyan, chief emerging markets strategist at BCA Research.

Broadly, long bets on China’s yuan were lowered after they hit a six-month high in the last poll. It follows the central bank stepping in to warn against speculative bets on the currency after its recent rally.

ING, in a note, said the yuan’s rise will slow from now on.

Bullish bets on the Singapore dollar, South Korean won and Philippine peso were all trimmed.

For the Indian rupee, a strong performer in May, long bets were also lowered.

The “significant hit to economic confidence in the second wave suggests the recovery is going to be delayed,” analysts at ING said, adding that it will cap any significant upside in the rupee.

The Asian currency positioning poll is focused on what…