Yuan Rallies to Highest Since 2018 as Growth Divergence Extends By 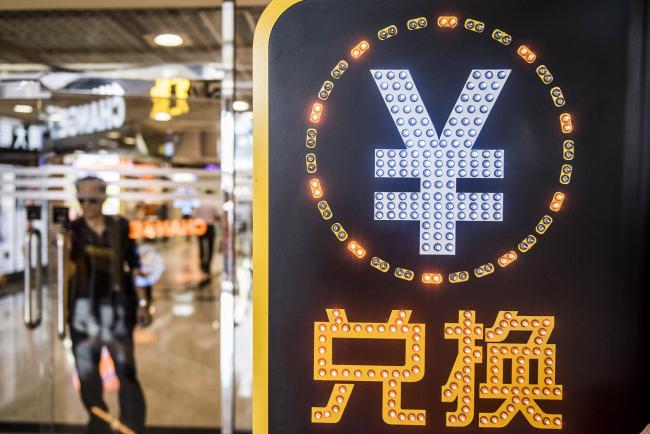 © Bloomberg. The currency symbol for the Chinese yuan is displayed at a currency exchange store in Hong Kong, China, on Wednesday, Aug. 12, 2015. The yuan sank for a second day, spurring China’s central bank to intervene as the biggest rout since 1994 tested the government’s resolve to give market forces more sway in determining the exchange rate. Photographer: Bloomberg/Bloomberg

(Bloomberg) — China’s advanced to its strongest level since 2018 amid signs that the nation’s economy is pulling ahead of others.

The currency rose as much as 0.2% to 6.4403 a dollar, the strongest since June 2018, after breaching its previous year-to-date high of 6.4245 touched in January. The move came after the greenback slid on weaker-than-expected U.S. jobs data on Friday.

China’s currency began a rebound in April, along with other emerging market peers, as Treasury yields decline. The yuan is the second-best performing currency in Asia this year as its economy rebounded quicker than others from the pandemic and the nation’s monetary policy starts to show signs of normalization.

“The yuan will continue to strengthen, as apart from a weaker dollar, the Chinese currency is also being supported by capital inflows and large trade surplus,” said Tommy Ong, managing director for treasury and markets at DBS Hong Kong Ltd. “The PBOC will likely use the fixing to slow the gains but it won’t use direct intervention.”

The yuan also strengthened against a basket of its trading partners’ currencies. The CFETS Index, which tracks the yuan versus 24 peers, is close to the highest level since 2018.


Read More: Yuan Rallies to Highest Since 2018 as Growth Divergence Extends By