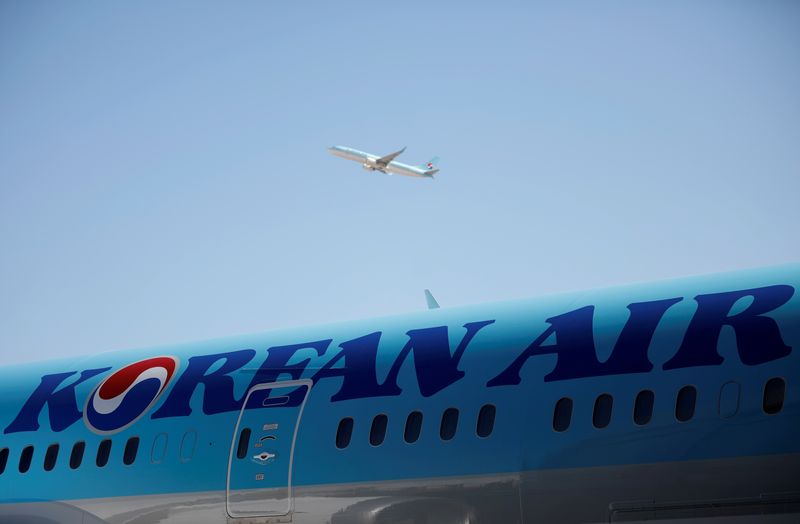 © Reuters. FILE PHOTO: FILE PHOTO: The logo of Korean Airlines is seen on a B787-9 plane at its aviation shed in Incheon, South Korea

(Reuters) – Korean Air Lines Co Ltd expects it will take two years after its purchase of Asiana Airlines Inc closes before the rival brands can be integrated, and it plans to merge their three low-cost arms into one, its president said.

Korean Air in November announced it would spend 1.8 trillion won ($1.59 billion) to become Asiana’s top shareholder, in aviation’s first major consolidation since COVID-19 brought the industry to its knees.

It is also the biggest shake-up in South Korean air travel since Asiana’s founding ahead of the 1988 Seoul Olympics.

In a written briefing to media on Wednesday, Korean Air President Woo Keehong said his airline hoped to receive competition approvals for the Asiana deal from nine countries by the end of the year.

“By consolidating these three airlines, it can become a top-level low-cost airline not only in Korea, but also in Asia,” he said.

Korean Air and Asiana will look to integrate their large aircraft fleets, which in some cases have different engine types for the same model, Woo said, adding that it would be easier to phase out Asiana’s planes, as many have leases expiring within five years.

Korean Air expects about 1,200 roles between the airlines will overlap, but it will manage the situation through attrition and retirements rather than direct job cuts, he said.

Asian Stocks Down as Bond Yields Climb By Investing.com